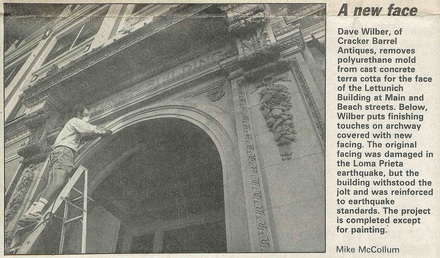 Dave Wilber was originally an antique dealer for 10 years, while studying art and sculpture at Cabrillo College in Aptos California.
During his course of studies he took a moldmaking class taught by Holt Murray that really struck a chord with him.
Coincidentally, one of his antique store customers owned a building in downtown Watsonville that had been damaged in the Loma Prieta Earthquake. She offered him a couple of dislodged pieces to use for his moldmaking class. The results were great and led to his first commission restoring the historic façade. The building (circa 1917)  originally had a terra cotta façade, and he was able to recreate that original facade with precast concrete elements to replace the damaged or missing terra cotta pieces. After the success of that project, he founded Monterey Bay Cast Stone in 1996. Many of his early projects were created by using those same molds utilized in the restoration project, such as fireplace mantels and a large wall fountain that has most of the same features as the original façade. It has an Italianate motif with egg and dart mouldings and a bas relief of a cornucopia of fruit flowing down the raised panel in the middle. For the Tuscan Fountain he created a small bowl from which water issues and cascades over the fruit. It is collected in a basin below that is bordered with pieces carrying the same molding detail as the facade above. It was a hit when it debuted at the Landscape and Garden Show back in the days when it was held at the Cow Palace in San Francisco. In the intervening years Dave has successfully completed countless custom projects and enhanced the value of many a home. 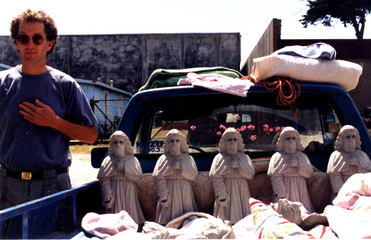